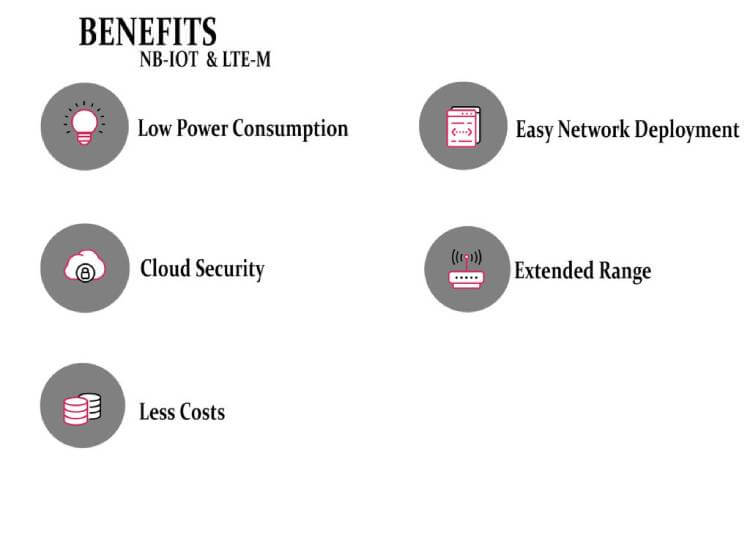 This blog is a follow up from our earlier blog introducing LPWANs and their types. If you have not seen that article we urge you to visit the article by clicking here

NBIoT and LTE-M are two new Low Power Wide Area (LPWA) technologies developed for IOT applications. Both are protocols for low bandwidth cellular communications that connect to the internet devices that need to transmit small amounts of data, with the lower costs (both hardware and subscription) and the higher battery life. They’re expected to connect hundreds of millions of things to the Internet in the next few years and there are some clear benefits that make these two technologies essential for the future of IOT communications

We are talking about connecting everyday objects to the internet (IoT) and in a few years we’ll be immersed in the Internet of Everything (IoE), so it’s not weird to have a wide variety of verticals in which these new LPWAN technologies can be applied.

NB-IOT is developed to enable efficient communication and long battery life for mass distributed devices and uses the already established mobile networks to connect these “things”. It is Europe focused and, after the first NB-IOT commercial launches have been completed, the global roll out will be for this 2018.

There are multiple features that can make this technology lead the IOT communications market in a short future (*have a look at the following table), but let us highlight 3 key elements:

LTE-M, also known as CAT-M1, uses the LTE installed bases and is optimized for higher bandwidth and mobile connections, including voice. At this moment is rolled out in North America and the commercial launches of LTE-M networks will take place globally, also, in 2018.

There are three main aspects to focus on when talking about LTE-M: 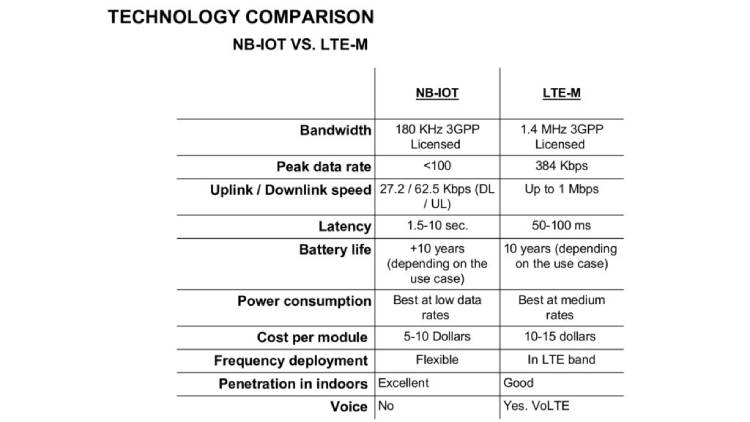 However, they differ in two aspects: latency and speed. Hence one must carefully consider his needs before opting for one solution over the other.

In some cases, you may find that you don’t have to make a choice between the two options at all; some applications get the same benefits from both. After analysing the similarities and differences between LTE-M and NB-IoT, you can make an informed decision that will set your system up for success well into the future.

The choice between LTE-M and NB-IoT depends largely upon the amount of data that you plan on using and how much latency is acceptable for your application (i.e. whether or not you require real-time communication).

Latency is the amount of time it takes to get on a network and send a message. A device can either collect information and send a packet to the cloud in intervals or it can communicate in real time. This is where you’ll see the most difference between LTE-M and NB-IoT.

For mission-critical applications, LTE-M is the only option. It supports devices that need to communicate in real time to ensure the application meets user-experience requirements. Some examples of real-time communication include voice, emergency data and precision tracking data.

Higher speeds mean that you can push more data through the network in a given timeframe. Speed is especially important for more data-intensive IoT applications like home security or wearable devices. Although LTE-M will never compete with the standard LTE and LTE-Advanced network bandwidth or speeds, it does allow for more data throughput compared to NB-IoT.

It may not be completely wrong to say that there are no NB-IoT use cases that LTE-M can’t also support. In other words, LTE-M supports any LPWA application, whereas NB-IoT is designed for simpler static sensor type applications.

Use cases like patient monitoring devices would likely require real-time communication leaving LTE-M as the clear winner. Similarly as application like Fuel tank monitoring for a remotely located emergency generator which is where LTE-M can be the clear winner. However, an application like pipeline monitoring would likely work with sending batch communication and therefore either NB-IoT or LTE-M could be used. Another example where either technology could be used would be a smart city application, like waste management, where sensors report on how full a city dumpster is. You don’t need up-to-the-second alerts on this type of information—you can receive updates periodically. Plus, there’s very little data to report at any given time. For these types of applications, you have the flexibility to choose based on regional availability or pricing.

In a nutshell, NB-IoT offers low bandwidth data connections at low cost and is currently Europe-focused while it is coming up in India, whereas LTE-M is optimised for higher bandwidth and mobile connections, including voice. It will start rolling out in North America.

LTE-M has higher throughput with lower latency and battery use is optimized accordingly. It works on-the-go, so it’s appropriate for applications in transportation and supply-chain tracking. It can also carry voice for applications such as residential security systems. NB-IoT is designed for lower data rates, where small delays are fine.

For example, a smart meter sending infrequent updates from a fixed location. Its battery use is optimized for that type of situation.

For people in India, the choice is even simpler. In India the NBIoT network is in the works by leading cellular service providers like Reliance Jio, Bharti Airtel, Vodafone Idea Ltd. LTE-M hasn’t gotten widespread or actually any real adoption in the Indian market.

Ambimat Electronics has come a long way to become one of India’s leading IoT(Internet of things) product designers and manufacturers today. We present below some of our solutions that can be implemented and parameterized according to specific business needs. AmbiPay, AmbiPower, AmbiCon, AmbiSecure, AmbiSense, AmbiAutomation.

To know more about us or what Ambimat does, we invite you to follow us on LinkedIn or visit our website.

What is LPWAN and types of LPWAN networks