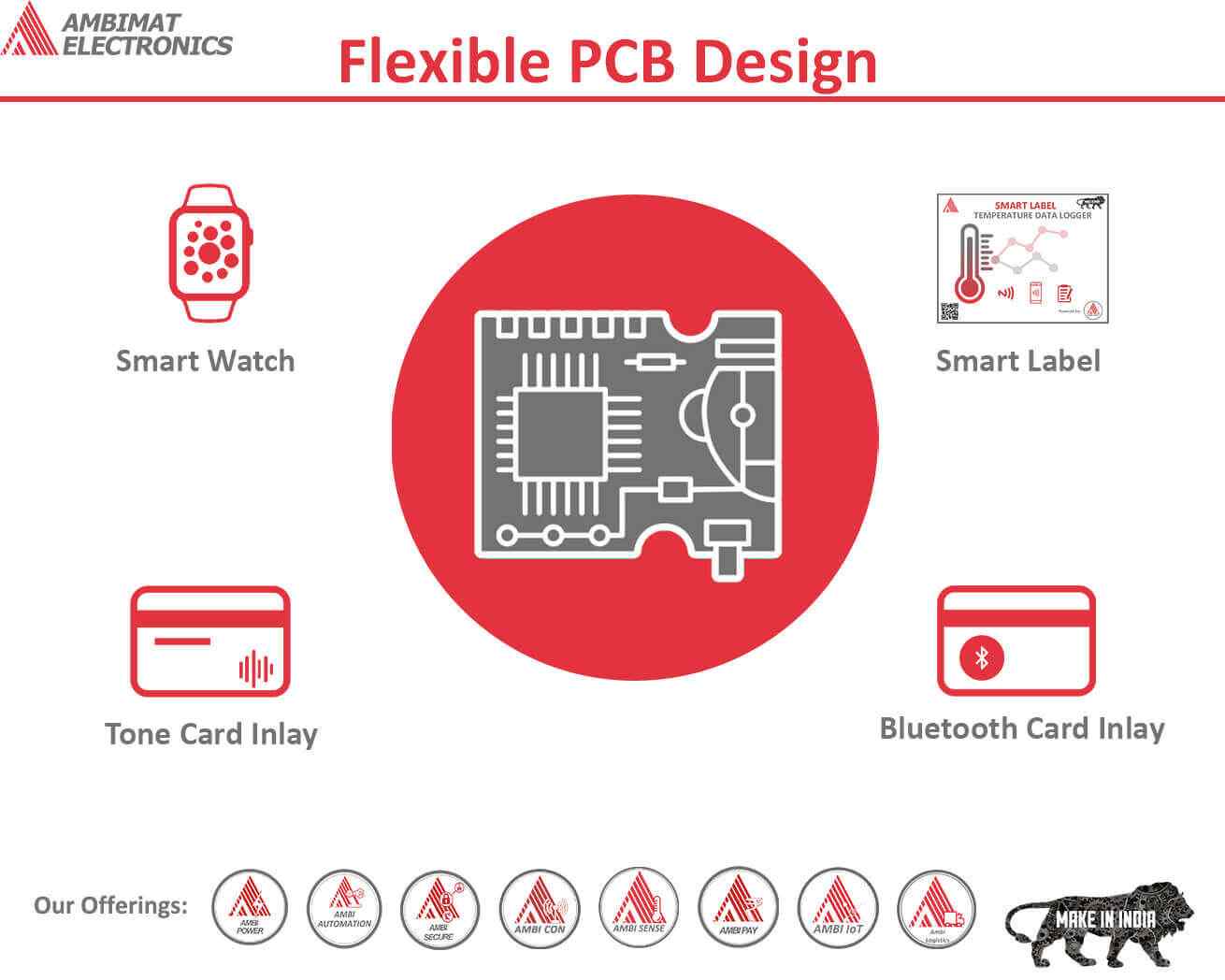 Flexible printed circuit boards (PCBs) aren’t much different than rigid boards during the design phase, except that the designer must account for the mechanical complexity associated with flex circuits. As with conventional PCBs, you can mount components on both sides of the rigid board. Because of the integration between rigid and flex circuits, a rigid-flex design does not use connectors or connecting cables between the sections. Instead, the flex circuits electrically connect the system.

Over the past close to four decades, Ambimat’s engineers’ team have had numerous occasions to be proud of their design prowess. One of the distinct accomplishments was designing, developing, and bringing up flexible electronics PCBs.

We want to take this opportunity to showcase our capabilities with some of the recent projects that were successfully completed in the past 3-5 years.

Some of our accomplishments with Flexible PCB designs:

The product is a smart wrist band that can measure steps, calories used, heart rate, etc. We designed a Flexi-Rigid PCB design with a four-layer Rigid PCB connecting to a two-layer Flexible PCB. The entire PCB was able to house two microcontrollers, a couple of sensors, a Bluetooth antenna, a battery charging circuit, and a battery all inside the enclosure of a size of ~ 45mm X 12mm X 17mm.

The design was able to pass stringent RF testing norms such as the FCC Part 15 Subpart B and C.

Smart Label enables businesses to monitor the food items’ temperature, which is perhaps the most critical parameter in cold chain logistics. Sensors are used on transportation modes such as trucks, rail cargo, or air cargo to monitor the food items’ temperature. We designed a temperature data logger 0.2mm thick flexible PCB with an NFC antenna etched in Copper on it. The NFC antenna was compliant with the ISO14443 NFC tag specifications that can send 100KBs of data from the onboard sensor to a mobile device in under a few seconds. The design also included a flexible battery.

The design can survive at a temperature of -20C for a prolonged period and cannot just function and record sensor values but also retransmit them to a mobile device simultaneously with just the tap of a phone.

The design was compact and accomplished within 35mm X 50mm dimensions.

The design is 85mm X 56mm X 1mm, on a PCB of 0.2mm thick with a separate Cu area of semi-rigid nature. The PCB had a 2.4GHz Bluetooth LE antenna, a few buttons, a flexible battery, and a few LEDs.

The product could communicate with another device and send a pre-defined string of data over Bluetooth 4.0 protocol whenever a button is pressed simultaneously, triggering visual feedback to the user through an LED lighting up momentarily.

Perhaps one of the most intricate designs of recent times was to design a battery-powered flexible PCB that could send out an encrypted data packet over the audible frequency range using a paper-thin speaker.

Ambimat did the entire development in under eight weeks, including implementing the required filters and circuit, all on an 85mm X 56mm X 1mm flexible PCB using a Cortex M4F based processor.